Growing up, I spent a lot of time at my grandparents’ house. I loved it there. It’s an acreage on the southeast side of town, near a big park that we could walk to. I believe it wasn’t part of Des Moines until I was maybe 5 years old- I remember it being annexed. It meant you couldn’t burn garbage in the burn barrel anymore.

Back then I was also the only grandchild, before my mom met my step dad and I had brothers and all of that type of thing. Being the only grandchild meant that I was utterly spoiled by my grandparents, and in particular my grandma Helen.

Summer days with her included chores around the house. I remember having to help my grandma carry the clothes baskets down the rickety steps to the cellar. In the cellar there was this really old style washing machine. I had to look one up, but it might have been a Maytag Wringer. If you aren’t familiar, it’s basically a tub on legs, with a couple of rollers and a crank above it, and then I think my grandma had another tub on the other side of the ringers with some cold water in it. So you would put some warm soapy water in the first tub, that’s where you put the clothes to start. The tub has an agitator similar to any washing machine now, so you let the clothes move around a bit and you put the clothes through the “wringer” or rollers, one article of clothing at a time. It would come out of the ringer and fall into the cold water tub to be rinsed, and then put back through the wringer again, then into the basket to be taken outside and hung on the clothesline. I am pretty sure this was the model, but I was also 5 so all of this could be wrong. 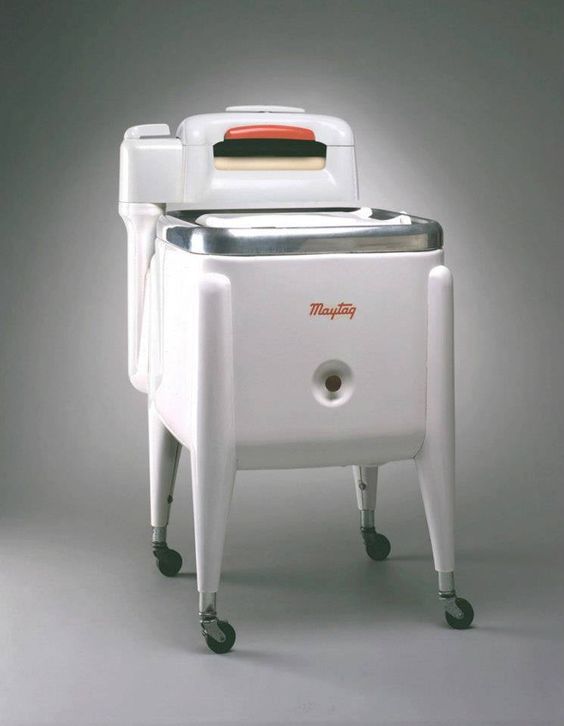 However, if I am right, that this 1946 Maytag washing machine was the machine my grandma was using in 1984, that really speaks to the old-fashioned, simple lifestyle my grandparents have always led.

Aside from doing laundry in the scary cellar, we would also watch a couple TV shows. My grandma always had a few favorites- the ones I remember when I was really young were Matlock, Murder She Wrote, and Wonder Woman. Sometimes I would watch the shows with her, but usually I would drift off a few minutes in. I’d either be asleep or in the other room playing make-believe football by the end of the show.

Other than TV shows, we ALWAYS watched the Cubs when they were on. My grandma loved the Cubs. She really loved Harry Carey. The cubs were often terrible but Harry was always, well, entertaining. Much like the TV shows, my attention span wouldn’t last a full game, so I’d be off pretending to be Andre Dawson by the 3rd inning. I’d either be using the front yard trees and fence as a “field of dreams” or crushing small apples with the whiffle ball bat on the east side of the house. I could stay out there for hours.

Back then the Cubs always played day games, there were no lights at Wrigley, so our summer days were often very consistent. In fact days with my grandma were incredibly routine and wholesome. We’d have breakfast in the morning; my grandma made the best French Toast. Then we’d watch Murder She Wrote on TBS or something, then do some chores, laundry or house cleaning, something along those lines. If the Cubs were on that’s how we would spend the afternoon. If not we might go to Walgreen’s or the park. We would watch for the mailman and then get the mail. Lastly my grandma would start dinner, each day around the same time. I am not sure what the time was but I assume it was somewhere around 5. As she made dinner we would watch out the front window for my grandpa to get home from work. “Keep an eye out for your grandpa, he is going to be here any minute” she would say while mixing something on the stove. It was so important that we knew when he was there. I guess she needed to ready herself.

The routine didn’t stop when he got home either. He would come in and sit at the dining table. My grandma would give him a can of Budweiser and a small glass. He would pour the beer in the glass and drink it while telling my grandma all about his day at work. Often he would be bitching about a co-worker, at least that’s what I remember my grandma saying: “here he comes, he is probably just going to bitch about (insert co-worker name) for 30 minutes and then we can eat dinner.” He would fill the small cup 2 or so times until the beer was finished and then we would eat.  After dinner, they would watch the news. After the news my grandpa would lay down on the floor in front of the fireplace and take a nap. Then we’d find something to do until the 10 o’clock news. Typically the space would be filled by playing the board game Trouble or working on a puzzle. My grandma loved the game Trouble. After the 10’clock news it would be time for bed. That was it. That was their life every day. So simple. So modest. So old-fashioned.

They were perfect. Even their faults were innocent and wholesome. My grandma could be very ornery and she had a sharp temper. She would get upset and call me a block head or say that I had no brain. If I made her really upset she would say “That’s it, I am going outside to get a switch and then I am going to beat you with it.” The farthest I ever pushed her was to the point where she would be outside looking for the perfect stick to whip me with. I assume she would never have been able to find the perfect one and eventually what antics I was up to would tire out. If her and my grandpa argued, it could get pretty bad. He would say something like “Well God Dammit Helen” and she would respond with “OHH SHUT UUP!” in an almost playfully angry tone, waving her hand as if to swat him away. She could have been the inspiration for every ornery grandmother character on a sitcom.

I could write all night long about my grandparents, the beauty and simplicity of their home. The all-American way in which they lived their lives. It’s the type of nostalgia I never get tired of talking about.

BUT, this is a blog about the life of addiction. It’s about the pain associated with addiction, and the idea that we can recover and live good lives.

I didn’t stay an innocent child in a wholesome environment forever.

As I got older and my disease became more and more important to my life, my grandparents became unimportant. My grandparents had always been there for me, and as I became an alcoholic I took advantage of them, just as I took advantage of everyone. I used them for money, borrowing money I never intended to pay back. I stopped popping in to watch Cubs games with my grandma or help my grandpa pick corn.

At a certain point, as people do, my grandmother started to get sick. She had always been a healthy person. She walked regularly or rode a stationary bike. I remember when she wasn’t able to ride the bike anymore- it really bothered her. She would complain about being in pain a lot. She had arthritis and gout. As she got older I believe she had more than one bout with cancer, and eventually had dementia. She would become really upset when she couldn’t remember something or realized she was confused about something. She would be upset with her own brain. She may have had more serious health problems, but I am not entirely sure because as she got ill, I started to stay away. Whether I really wasn’t mentally in a place where I could deal with her declining health, or I was using it as an excuse for to be a selfish alcoholic, I wasn’t around much at all for the twilight of her life. In fact, it’s my greatest regret. I was a coward and I was selfish. This is the person I am when I am engulfed in the disease. Being a selfish coward fills me with shame. The shame leads to depression. The depression can only be cured by drinking, and thus I am stuck on the hamster wheel.  My life was spinning out of control and her life was finishing. She really was my favorite person ever.

I think any therapist worth their salt would say that the idea of losing my grandma was too much for me to deal with, so I avoided all of it. By not being there and by drinking. I’ve mentioned several times throughout these blog posts that alcohol was my escape from any type of mental pain. It was an awful habit that I felt was totally normal.

My grandma passed away in 2010. I doubt I had spent any time with her for years leading up to that day. I mean I showed up when she was in the hospital or for a birthday party but I was completely avoiding the place I had loved so much as a kid.

When she died I was at a point where I was trying to get sober, but when I failed, I would fall into these terrible drinking binges. The failure of an attempted sobriety always sent me to a really dark place. Couple that with the passing of my favorite person, it wasn’t pretty.

I drove my Grandpa to the funeral. I was driving the first car in the procession and I might have been a pallbearer. I am not sure because I barely remember it. I was really drunk the whole time. I think I held it together for the most part, greeting people and shaking hands. Accepting the “I’m sorry for your loss” with a sad smile and tears in my eyes. I was just trying to be numb, trying to get by without feeling it.

That’s a really shameful moment for me. A moment you don’t get to do over.

The person who had taught me so much was being put to rest and I couldn’t even show up without getting hammered beforehand.

How could I have gone from the innocent child hitting apples, pretending to be Jerome Walton, to the type of monster who shows up drunk to his grandmother’s funeral?

It’s a baffling disease. It changes people. It takes you from your true self and makes you its slave.

Fortunately, I sobered up for good soon after she passed away.

When you first get sober, you want to go back and fix the mistakes that you’ve made. You want to repair things you’ve broken. You want to tell people you are sorry, that you were sick and didn’t realize it. You want to tell them you love them and that it will never happen again.

It just doesn’t work that way. You can’t ever go back and fix things.

That’s a really tough thing to deal with when you first get sober.

I’ve come to understand that I can’t erase the mistakes I’ve made. I can’t apologize them away. I can’t get that time back.

The best I can do is not make those same mistakes again.

I could start by being there for my Grandpa, who was now without his wife of 63 years.

So that’s exactly what I decided to do.

I’ll tell you all about that in the next post, Breakfast with Grandpa (working title).

Until then – Be Sound.